‘California is kind of a long-ass state,’ says Barney ‘Scout’ Mann apologetically as he rounds up his evening’s chat and points us all to dessert. This is the third dinner talk I’ve enjoyed at Scout and Frodo’s, a trail angel couple in San Diego who give an incredible gift to the thru-hiking community every year.

Having completed the PCT themselves in 2007, Barney and Sandy Mann host some 30 hikers a night, feed them, drop them to the phone store and outfitters, and drive them to the trail each morning (which would otherwise involve a feat of public transport manipulation so complex it makes Cornwall’s bus system look usable).

After arriving shell-shocked and a little overwhelmed in LA, the Mann’s home has been a haven to get myself ready to go. I’ve got used to the rhythm of the day here: after the day’s starters have headed off in the cars at 6am, us international stragglers come in for a peaceful breakfast; as the hours go by more hikers start arriving, collected from the airport or station by a fleet of volunteers; there’s gentle pottering around as we sort through our packs, chuck out unwanted gear and swap ideas; I try out my new tent in the garden, which attracts a host of interested onlookers and the kind of deliciously dorky chats I never saw myself having (‘Say, is that the new BA Tiger Wall? How do you like the added headroom from the cross bar?’ etc); then come 6pm the conch is sounded and it’s dinnertime.

Scout and Frodo talk through several topics each evening – leave no trace, river crossing safety, looking out for each other on the trail – and round off with a different gem of PCT history from Scout’s recent book.

There’s the couple who completed the PCT in the 50s on horseback, documenting the whole journey on an enormous camera… or the scouts who relay hiked the PCT in the same decade, resupplied by air drop and updated the world by carrier pigeon. A cheer went up when one drop exploded in a yellow cloud, and the boys realised the dreaded powdered eggs were no more.

One of the talk’s sterner warnings is not to be the one scrabbling around realising nothing fits in their pack, 10 minutes before 0 hour. So the night before, I have The Pack Moment. After obsessively gram-counting my pack for the last few months, I’m impressed at how wantonly I’ve been chucking new stuff into the mix. Chunky paperback? In you go! 300g of Spanish condensed milk? You made the cut! I haul on what shall affectionately be known as The Burden and can’t help but let out a proper cartoon ‘Oof’. This is going to take some getting used to. 6 litres of water to get me safely through the first 20 miles is not sitting too pretty.

On Sunday 8 April, it’s my turn. Rachel & I scoop up everything from our treehouse nest (built by Scout with his daughter when she was 14, and a bed view that’s going to be hard to beat at even the most scenic camp spots). We swear silently but effectively as we haul our packs on and take them down to the porch in the 5am stillness.

After a nervy breakfast, Scout sends us off with a hug to Mar’s car, who’s a volunteer driver for the first time this morning. Led by Frodo, our little band of cars winds up through the hills towards Campo, the dawn peeling back to reveal real Wiley Coyote country, scrubby hills and sculptural rocks towering over canyons.

And then we’re at the monument, a place that I have been dreaming of for months, a silhouette planted on the back of my eyes like I’ve been staring at it too long in the sunlight. It is both more beautiful, and more wonderful, and more real and touchable than I could have thought. This is it, the PCT. A dirt path snaking back down the hill towards Campo. Nothing more, nothing less.

Mexico squints through the gaps in the rusty paneling, as border patrol trucks zip up and down the track. Ziggy gives me a quick trekking pole 101 right by the fence, having learned last night that I’d never used them before. ‘Effectively you’re turning yourself into a quadruped,’ he explains, as I wobble up and down the border fence looking unconvinced. I wonder if this is the kind of utopian vision Trump has for his wall – a series of shiny hikers taking Bambi steps under the watchful gaze of Border Force. 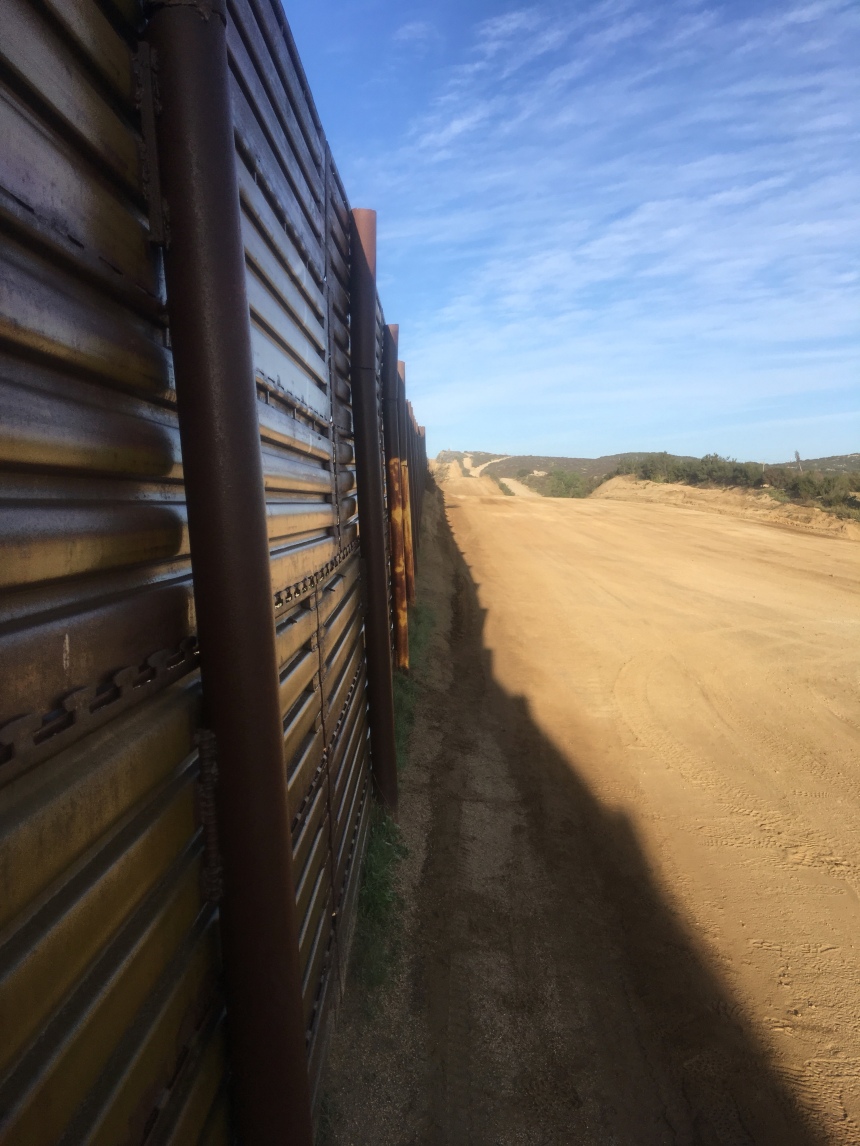 Hikers are setting off in clumps as the photo frenzy calms down, and finding a gap in the flow, I set off. It has begun.

2 replies to California is a long-ass state

Right now I'm a fish out of water and in the mountains - a writer who's downed tools to walk up America. Please do have a nose around, support my walk, or get in touch if you'd like to work with me when I'm home in October.